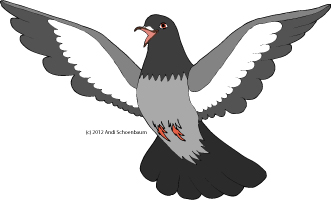 Randy flew into Andi’s bedroom and landed on her top sheet.  She tip toed up to the top of the covers, following the line of Andi’s body, and peeked over the sheets to find Andi snoring!  Something was terribly wrong.

Randy leaned closer, giving Andi a good look.  She looked across the bed at Kira, who seemed bewildered too.  Randy decided to investigate further gently pecking Andi’s cheeks and eyelids.  “Wake up… wake up… why are you still sleeping?”  Andi moved her head to the side and groaned a couple of times.  She opened one eye and said, “Oh, hi.”

Randy pulled her head back in alarm.  What happened to their morning greeting, “Oh, Good Morning, Little Bird!” Andi always said.  Not this morning.  Something was very wrong.

Kira stepped closer and sat beside them.  Kira and Randy both leaned over and stared at Andi, not knowing what to do.

It was breakfast time, though, so Andi peeled back the covers and walked down the hall, very slowly holding her head.

She put a scoop of feed in Randy’s bowl and sprinkled some pellets in the fishbowl for Dragon.  She poured fresh water with vitamins for Randy, then went downstairs to feed Kira in the kitchen.  Kira followed her an meowed enthusiastically about her breakfast of wet and dry food and water with vitamins.

While in the kitchen, Andi opened the freezer and removed an ice pack.  She took some medicine then went back to bed.

Randy heard Andi come back upstairs.  What is she doing?  She usually has breakfast downstairs with Kira. Randy went to investigate.  She flew into the bedroom and landed on her top sheet.  She tip toed up to the top of the covers, following the line of Andi’s body, and peeked over the sheets to find Andi with her eyes closed an ice pack on her forehead.  Randy was worried.

She tried to play with Andi, but Andi wasn’t responding.  Randy paced back and forth on Andi’s chest, pausing to think.  She flew up to the curtain rod and looked down at Andi for a new perspective.  Maybe there was something she hadn’t thought of?  She flew down to the carpeted floor and paced back and forth there.  What is there to do?

Finally, Randy flew back up to Andi’s top sheet and decided to snuggle in.  I’ll stay right here and be with her.  That’s all I can do.

Hours and hours and hours passed.  Andi groaned and rolled around.  She got up a few times to change her ice pack. Randy rode downstairs to the kitchen on Andi’s shoulder, not leaving her side.

When Andi started feeling better, she opened her eyes and said, “Hello, Little Bird!”  They played and Randy turned circles.

Andi rested a little while longer then got up to refresh in the shower.  Randy went back to her second favorite perch on the top of the door in the room with Andi’s arts and crafts.  After Andi showered and dressed, she went to find Randy.

“Thank you for staying with me today, little bird.”  She threw Randy a big kiss and Randy bowed her head to catch it.